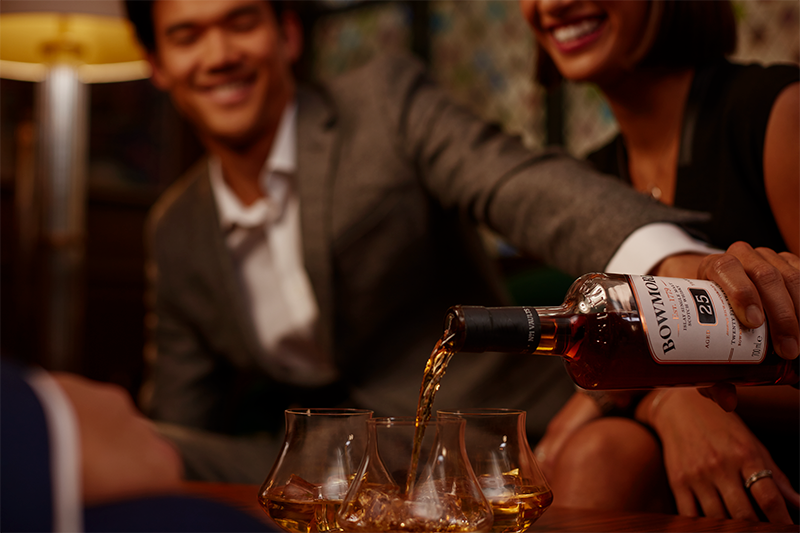 You don’t get more original than Bowmore. As the first licensed distillery on Islay, the legendary Bowmore Distillery has been showcasing true craftsmanship that encapsulates the remote Scottish island for more than two centuries.

Pioneers, history makers, and true masters, the talented folk at Bowmore have cemented this label as a world-renowned distillery. Dedicated to keeping traditional processes and technology in use, this distillery is a truly unique one to explore…

The history of Bowmore Scotch

This legendary distillery has a long and rich heritage. Let’s start at the beginning…

1837 – Bowmore Distillery was bought by Glaswegian twin brothers, William and James Mutter. Their legacy includes building the sites lade, which draws water from the River Laggan.

1940 – The distillery had changed ownership a handful of times by 1940 with Sherriff back at the reins as the Second World War was underway. The distillery ceased production as it was commandeered by RAF Coastal Command to help with the war efforts.

1979 – Some years and another change of ownership later, now in the hands of whisky broker Stanley P Morrison Ltd, Bowmore celebrated its bicentenary.

1993 – The first expression of the coveted Black Bowmore trilogy was released. A bottle of this rare whisky is now valued between £25-£30k.

2012 – History is made with the release of the 1957 expression. It’s the oldest Islay single malt ever released, matured in the No.1 Vaults for 54 years. Just 12 bottles exist making it an extremely rare whisky.

The malt masters at Bowmore might have made history in 2012 with the release of the 1957 expression, but they didn’t stop there. At a charity Christmas auction the same year, bottle No.1 was sold at a whopping final hammer price of £100,000.

Not only is the expression the oldest Bowmore bottle, but it is also the oldest Islay Single Malt ever released. Its six-figure price tag makes it one of the most expensive Scotches sold. Christmas came early for a selection of charities that each were gifted £11,000 from the sale of this exceptional Scotch.

Making the most of Islay’s wild beauty, fierce seas, and harsh Hebridean winds, Bowmore has been producing its signature Scotch on the remote island for over 240 years. Still using many of the traditional whisky making processes, the malt masters at this iconic distillery continue to champion handcrafted quality. Let’s explore the Bowmore way…

Unlike most distilleries, Bowmore still has its own Malt Barn – an airy shed where they malt their own barley and start the process of germination. The raw barley is steeped for 27 hours in fresh water sourced from the River Laggan before being spread out across the stone floors of the Malt Barn.

After 24 hours the barley is ready for turning, keeping the grains aerated and cool, and the rate of germination slow and consistent. Over the next seven days, Bowmore Maltmen will turn the damp barley every four hours, day and night, using large wooden shovels. Once it’s ready, the barley – now called “green malt” on account of the tiny shoots beginning to show – is taken to the kiln for drying.

This is where the germination process is halted, for the barley to be dried. It can then be milled into grist. Within the Bowmore kiln, two furnaces control the air temperature – up to 60C. The smoke from these furnaces billows up through the mesh floor, where the damp green malt is spread out.

For the first 18 hours of drying, peat is added to the furnaces, giving the malted barley the subtle smoke flavour that is a key characteristic of Bowmore whisky. For the next 42 hours, hot air is used to gently dry the malt. The hot air is recycled energy from the distillery’s innovative waste heat recovery system.

Now dry, the malted barley is taken to the distillery’s Porteus Malt Mill, where it is ground into grist. The mill is a piece of engineering from a bygone age, installed in the 1960s and is still in use today – having run almost continuously for around six decades.

The clean grain is ground through two sets of rollers, grinding 20kg at a time. The first set cracks open the grain whilst the bottom rollers, which are more tightly set, grind the grain down to grist.

Inside the Mash House is the Mash Tun, a huge pot of hot water heated by 80-year-old copper kettles. Here, the grist is added to the hot water where it mashes, or steeps, turning a rich dark colour and giving off a powerful malty aroma. Drained through the Mash Tun’s sieve-like bottom, the grain is then mashed another two times, at slightly higher temperatures, collecting as much sugars from the barley as possible.

This is where the miracle of fermentation begins. Once cooled, the sugary wort is filled into Oregon Pine Washbacks – it takes six hours to fill just one. Once full, yeast is added to start the fermentation process. Frothing vigorously for about two days, the mixture gives off carbon dioxide as the yeast feeds on the sugars, converting them to alcohol. The liquid left is known as wash and tastes and smells very similar to a strong malty beer with an ABV of about 8%.

At the heart of the Bowmore Distillery is the Stillhouse. Inside are four stills where the spirit that will become whisky is made. The first distillation takes place in two Wash Stills – great copper kettles that are heated to 93C. As the temperature rises, the wash starts to bubble, and the alcohol evaporates. This liquid, now called Low Wine, will be about 22% ABV and needs to be distilled again to become spirit.

The second distillation is carried out in the smaller Spirit Still. The Stillman will then draw off the vapours in the three parts: Foreshots, Heart Of The Run and Feints. Clear like water but with an ABV of 69%, the Heart Of The Run is the only cut which fills Bowmore casks, ready to slowly mature in the legendary No.1 Vaults.

The final stage of the process is arguably the most important. This is when the alcohol develops its complex flavours and becomes Bowmore single malt Scotch whisky. To legally be considered a whisky, it must mature for at least three years. At Bowmore, the malt masters mature the distillery’s world-class whiskies for a minimum of nine years as standard.

It’s at this stage when the whisky absorbs the Islay coastal air, infuses the characteristics of the cask it’s being stored in, and deepens in flavour. Most commonly using ex-American Oak Bourbon barrels, Bowmore has created a signature light golden liquid with sweet vanilla flavours.

At Whisky Kingdom, we’re proud to stock a wide range of Bowmore bottles, including the rare 30-year vintage released in 2020. You can also sample this Scotch with a miniature serving, or give the gift of an iconic dram with a gift pack. Discover this legendary distillery for yourself and explore the full range.