X
This site uses cookies to provide and improve your shopping experience. If you want to benefit from this improved service, please opt-in. Cookies Page.
Accept Cookies
Whisky Kingdom | BlogWhiskyWhat are the different types of scotch whisky?
Menu 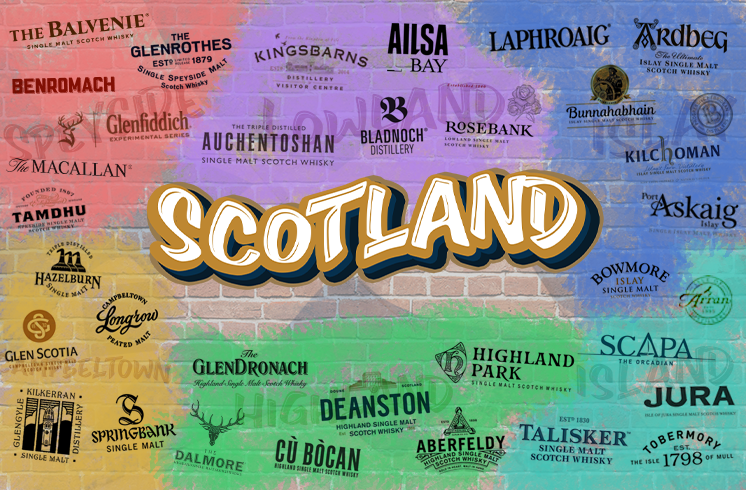 What are the different types of scotch whisky?

Let’s take a tour of Scotland’s famous tipple – from the varied bottles of the Highlands and the fruity notes of its subdivision Speyside to the unique distilling processes in the Lowland and Islay, and let’s not forget the signature malts produced in Campbeltown.

First, we need to acknowledge Scotland’s heritage in distillery and why this beautiful country is recognised as the birthplace of whisky.

Scotland is undeniably the world’s whisky leader. With over 125 distilleries across the country, it is fair to say that the Scots know a thing or two about producing iconic whisky. Did you know some Scottish distilleries were operating back in the 18th century?

Scotch, or Uisge beatha – meaning ‘Water of Life’ in Gaelic, is different from other whiskies as to achieve the prestigious scotch label, it must be aged in oak barrels for at least 3 years.

Due to the vast landscape of the Highlands, scotch from this region can vary greatly. The region also includes the islands and is often grouped into four subregions:

North – These are bold and flavourful single malts, offering sweetness and richness.

East – There are some full-bodied, dry whiskies here, with lots of fruit flavours.

From lighter whiskies all the way through to salty coastal malts, the Highlands has a tipple for any taste.

A subdivision of the Highlands regions, Speyside is a geographical hotspot when it comes to whisky. It’s the most densely populated Whisky region in the world and is widely recognised for producing some of the highest quality bottles. Whisky enthusiasts rarely pass up the opportunity to sample a Speyside scotch. With subtle flavours suitable for even the most sensitive palette, Speyside whisky is often more delicate and fruiter than other malts on the market – making it a favourite for many. You’ll find notes of apple, pear, honey, vanilla, and spice.

Located between Inverness and Aberdeen, this area has a rich heritage in whisky production, with some of the country’s longest standing distilleries being found in the Speyside region. Not any old whisky can be labelled a Speyside scotch though…

For a whisky to be classed as a Speyside, it needs to be created near the river Spey with the distillery sourcing its water from the Spey or the springs and streams that feed into the river.

Covering Scotland’s southern region, Lowland was once a thriving area of whisky production – with more than 30 distilleries in the 1700s. However, over the centuries the industry expanded to other regions and there are now just four distilleries producing commercially available scotch.

Continuing the Lowland legacy, these scotch powerhouses are producing single malts renowned for their gentle and elegant palettes. You’ll find notes of grass, honeysuckle, ginger, toffee, and cinnamon. These whiskies are often lighter in character, making them an excellent aperitif.

Whilst you can find many signature Lowland single malts, the mellow makeup and dry finish make it the perfect base for blends.

Try Auchentoshan, Bladnoch, and Daftmill to get the true taste of Lowland malts.

Pronounced ‘eye-luh’, Islay is a unique region where most of the island’s population is involved in whisky production. The island’s sought-after variations of scotch are famous for being fiery and heavily peated, with distinctive maritime styles – chosen by those with a strong and rich palette.

Boasting eight distilleries, this tiny island is underpinned by its whisky heritage and is known across the world as a key player in scotch production. The island hosts an annual whisky festival, welcoming enthusiasts from far and wide to enjoy the iconic tipple with the locals who produce it.

Some Islay bottles to try are Ardbeg, Ardmore, and Finlaggan.

The Campbeltown region is a small peninsula on Scotland’s west coast, offering many scotch varieties that are full of flavour. You’ll experience hints of salt, smoke, fruit, vanilla, and toffee make up its rich character.

Similar to the Lowland region, Campbeltown was once a thriving malt whisky region of more than 30 distilleries – in its heyday, it was known as the whisky capital of the world. Now, you’ll find just three producers remaining within this small coastal settlement, continuing its legacy, and providing a window into the area’s illustrious past.

Here at the Whisky Kingdom, we’ve curated the best scotch that Scotland has to offer, from classic blends to prestigious and rare single malts. Explore our collection.